For the longest time I considered this movie to be a simple joy ride through dreamy fantasy, some thing absurd just for the sake of absurdity. When compared to the Henson Studio’s other work, particularly The Cube, Time Piece, and the revolutionary conflict in Dark Crystal: Age of Resistance (at the very least the source material for the show was a story centered around genocide- pretty heavy), on its face Labyrinth seemed absolutely silly and no thing much more.

Side note: The Cube and Time Piece used to be on Youtube in their entirety but have since been taken down. It looks like they’re both on Amazon Prime now, which sucks but The Cube especially is worth every penny (it’s my favorite movie, if I’m not about to convince my self here that Labyrinth is in stead).

First, let’s talk about the labyrinth its self. It was Jean Baudrillard’s fascination with Gorge Luis Borges’ fantasy stories as symbolism that got me thinking about this. By the time he described postmodern culture as ‘labyrinthine’ in Simulacra and Simulation I was fully primed to piece that apart. Labyrinths are confusing, designed to make the inhabitant or navigator perpetually lost. To give one the sense that, no matter how much progress they have made, they have gotten no where. Sounds like today’s economy! The Labyrinth of Greek mythology, the one designed and built by Daedalus for the king of Crete, was a prison for the Minotaur- a prison the Minotaur could conceivably escape from, but that was so maze-like that the likelihood would be considered insignificant. Baudrillard referred to our society as labyrinthine because it is an absurd prison for our minds; most of us would sooner give up and submit to it than find its exit. Its endless corridors and pointless dead ends suggest that its entire structure is either meaningless or intentionally exasperating and exhausting.

Jareth’s labyrinth represents a society of nonsense, a culture that is impossible to navigate logically, that ‘can’t be taken for granted’.  It exists in a fantasy world separate from Sarah’s, is unreal (or per haps, borrowing Baudrillard’s famous term, hyperreal). It is immediately established in the film that Sarah suffers from feeling alienated, frustrated with rules, threatened by her step mother who is concerned with Sarah’s fitting in. Her role-playing at the start and the contents of her bed room make it clear that she’d rather be any where but 1980’s suburban US Empire. The labyrinth she later finds her self in seems to be inspired by her toys and fantasies, a world all her own, and yet it frustrates her just as much as her real life, and is even more antagonistic. To me, this is merely an inversion of her expectations: you can’t escape from the postmodern condition in to fantasy because the postmodern condition is the fantasy. It is no coincidence that the only human inhabitant of the labyrinth is an adult sexual predator. Between Jareth and the goblins, like in her real life, Sarah has no one to relate to. All is other. It is no coincidence that her motivation is to save an innocent human baby from becoming a goblin, or that her baby brother is to be transformed simply by a prolonged stay in the labyrinth. Toby’s dreaded metamorphosis is from innocence, a simple creature of the real, in to an other servant of the predatory king, a human commodity, a being disfigured by Neoliberal capitalism.

Now Jareth. Again, the Goblin King is the only denizen who is not a goblin. He’s so separate from his subjects that he isn’t even of the same species, easily a nod to the anti-human character of the ruling class. Jareth is a pedophile, an abductor, and spins rhetoric of his vileness being inevitable or even good. Toward the end Jareth says, ‘I ask for so little. Just fear me, love me, do as I say and I will be your slave.’ Is it not a popular trick of the powerful, to convince us that they serve the powerless? To submit fully and trust in their benevolence? Yet Jareth exposes this here so plainly that it’s as if even he believes the farce at this point. And Sarah’s response, ‘You have no power over me,’ is precisely the line that undoes him. Jareth’s other tactics of oppression include making Sarah forget her purpose with the consumption of a peach (don’t think, consume) and seducing her through a masquerade ball.

In the ball room scene he doesn’t once speak to her, only singing, and every prop and character demands her attention, beyond elegant, extravagant, fantastic even for the labyrinth- this is the spectacle. This scene is the seduction of the media. Jareth’s singing is disembodied. You hear his voice but his lips don’t move, as if his message belongs to the dance in stead. Sarah has to push her way through the crowd, but Jareth navigates with ease, seemingly able to teleport. Jareth is the villain, yet Sarah pursues him here, the one guest that is serious and in control, as if to say, ‘The spectacle is insane and treacherous, but I will save you.’ Once she finds him and they dance, there is suddenly plenty of room for her to move. Yet it is his disembodied voice that drives the dance, and after they begin to dance together Jareth’s lips begin to move; Sarah realizes the spectacle belongs to the King, and flees.

Now let’s rock through the rest of the characters. Hoggle is some one turned sour by the system. Tough on the out side, pathetic on the in side, he is introduced while exterminating faeries, people smaller than he is, people he claims can’t be trusted, yet it isn’t addressed whether they are even capable of speech. Does the faerie have justification for why they bite Sarah? Hoggle just assumes it’s because they’re beastly. Division of the lower class, any one? Hoggle’s arc is that he betrays the Goblin King once he realizes that loyalty to power is rewarded with no thing, while Sarah promises friendship. Before he befriends Sarah, monetary value is all he is concerned with- a transformation from consumer values to social values.

Ludo’s story is pretty simple: scary strangers are just people too, and we need to learn to cooperate with them. His communication skills seem poor, yet he’s the only one who can communicate with rocks. In other words, he has a special understanding of language that others didn’t even know existed, an understanding that saves their lives.

Sir Didymus seems to be our struggle with the concept of bravery. He is impervious to despair, but also naive. He’ll never give up, but also would have probably gotten them all killed, if he was in charge. We’re still sold heroes like these to look up to, and yet in real life we’re often hesitant to stand up for what we believe in- and are often told that doing so is foolish. Since he’s got a weird gender roles thing going on with Sarah and expresses his faith in meritocracy after battling Ludo, may be he’s just a hero caricature meant to get us to abandon the cult of the hero entirely.

The wise man with the bird hat offers wisdom and then asks for payment, and the wisdom is garbage. This is the aesthetic of wisdom as commodity, and pseudo-wisdom here is shown to be self-contradicting, as represented by the tension between the man and his talking hat. The brief bit of false wisdom offered here is just a repackaged general description of the labyrinth, not unlike how self-help authors will just reinterpret status quo values to appear novel and profound. As Sarah and Hoggle move on, the hat remarks, ‘There go a couple of suckers.’

Get a load of the fireys. These guys are the most openly and consciously accepting of the system. At first glance they seem like the good guys, not falling for the appeal of high society, singing:

Yet they acknowledge that some one has real estate, jewelry, and gold mines, while they can’t even afford clothes, and insist that the answer to this problem is to ignore it. They willingly tear their selves apart to enjoy poverty, and though they sing that they ‘don’t charge nothin”, they insist that Sarah destroy her body too, in order to share in their pretend freedom. They can’t understand their own violence, and their answer to oppression is escapism: 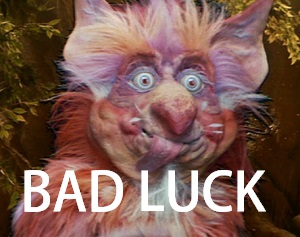 We can show you a good time…

The fireys are the doofuses who believe you can create your own paradise within the system by just ignoring all of life’s problems. Saying, ‘You don’t need two ears!’ is to say that even possession of your own body is luxurious, a sign that the pseudo-asceticism of the Fireys is practically suicidal.

The hoarders in the junk yard are pretty obvious. Their thing is empty commodity collection, trying to fool Sarah in to believing that possessions provide intrinsic meaning and belonging. They dwell in a literal garbage heap, yet the one on screen is still shocked when Sarah refers to possessions as junk. We see the theme of forgetting one’s identity and purpose here again, as Sarah is still struggling to remember why she’s in the labyrinth. First it was the poison of consumption, then the spectacle, now commodities as identity.

Ah yes, that stupid worm that made it on to all of the T-shirts. Why, if it isn’t the obtuse middle class liberal who can’t even understand your problems? The worm is the first to say that no thing in the labyrinth can be taken for granted, admits that he can’t navigate it, and yet seems to take for granted his own ease of access (can see through the optical illusion of the walls despite being ‘just a worm’). The worm immediately trivializes this assistance by offering his family’s hospitality, and has no idea that Sarah literally can’t accept the invitation, even if she wanted to (she can’t fit through the entrance to the worm’s home = his cozy life style is inaccessible to her). Finally, the worm assumes Sarah wouldn’t want to find the castle, so misguides her, assuming the poor should have no interest in politics. The worm, the friendly gate-keeper that will assume he knows what’s best for you and then lead you away from your needs.

Now the Bog of Eternal Stench. The king’s worst punishment is ostracism, smelling so bad that no one will ever want to be around you for the rest of your life. Even Hoggle, who when threatened with the bog is still trying to present a solitary nature, is horrified by this. The Bog is the threat of further alienation when you reject the status quo, the fear of being alone and the shame of it all.

Sarah continually complains that things aren’t fair, and Jareth isn’t the only one who mocks her for it, as though it’s foolishly utopian to expect fairness. Never is Sarah even able to articulate why fairness is some thing realistic or some thing to strive for, because the aesthetic of capitalist realism is too strong. This is just the way it is, and you only value fairness because you are a child. But more than fairness, in the end it’s companionship that Sarah values most. It is no longer fantasy that she longs for, or escape, but friendship and more specifically social support: ‘If you need us.’ And it’s not just her friends that answer her call, but all sorts of goblins appear, including the King’s soldiers. Sarah’s new social values unite the people, and the Goblin King is left alone, isolated and invisible in his antisocial selfishness, left with only the power to fly away in to the night and be forgotten.